Are we in Schrodinger’s Recession? Pop culture fan or not, the quantum mechanics theory of Schrodinger’s Cat has become commonplace thanks to “The Big Bang Theory” for a shortcut for the possibility of two states of existence at once.

Like the cat in the experiment, the U.S. economy may have this duality. It may be in a recession right now, or not at all until we actually observe one.

From an equity perspective, the broader market (SP500) (NYSEARCA:SPY), growth (QQQ) (IWF) and small-caps (IWM) are all in bear territory.

And the Treasury market (TBT) (TLT) (SHY) is pricing in a Fed overshoot with the recent tumble in yields and breakeven expectations.

“After this morning’s Manufacturing ISM Report On Business from the Institute for Supply Management and the construction report from the US Census Bureau, the nowcasts of second-quarter real personal consumption expenditures growth and real gross private domestic investment growth decreased from 1.7 percent and -13.2 percent, respectively, to 0.8 percent and -15.2 percent, respectively,” the latest report said.

Two consecutive quarters of contraction is the usual definition of a recession. But it’s the NBER’s definition of declining economic activity that is the arbiter.

“The NBER’s definition emphasizes that a recession involves a significant decline in economic activity that is spread across the economy and lasts more than a few months,” it says. “In our interpretation of this definition, we treat the three criteria – depth, diffusion, and duration – as somewhat interchangeable.”

“That is, while each criterion needs to be met individually to some degree, extreme conditions revealed by one criterion may partially offset weaker indications from another,” it added.

“For example, in the case of the February 2020 peak in economic activity, the committee concluded that the subsequent drop in activity had been so great and so widely diffused throughout the economy that, even if it proved to be quite brief, the downturn should be classified as a recession.”

“The NBER’s definition of recessions is deliberately vague,” Pantheon Macro Chief Economist Ian Shepherdson said. But “they usually require a decline in payrolls to validate the message from other data.”

“Payrolls rose by an average of about 440K per month across the first half of the year, a pace more consistent with a raging boom than recession, though much of the increase presumably reflects continued post-Covid catch-up hiring.”

Getting back to stocks, Jim Paulsen, strategist at the Leuthold Group, noted that the New York Fed’s recession model, which uses the 10-year/3-month Treasury yield curve to predict a recession in 12 months is only at 4.1%.

“While most models suggest the risk of recession in the next twelve months is minimal, fears of a recession are extraordinarily high,” Paulson wrote. “Therefore, many believe bottom-up Wall Street analysts will soon be forced to significantly lower most companies’ earnings estimates”

“Nevertheless, if history is any guide, until the NY Fed’s recession model rises to at least 20%, perhaps EPS fundamentals will continue to be a pleasant surprise?”

See how in real terms, stock are looking at Civil War performance. 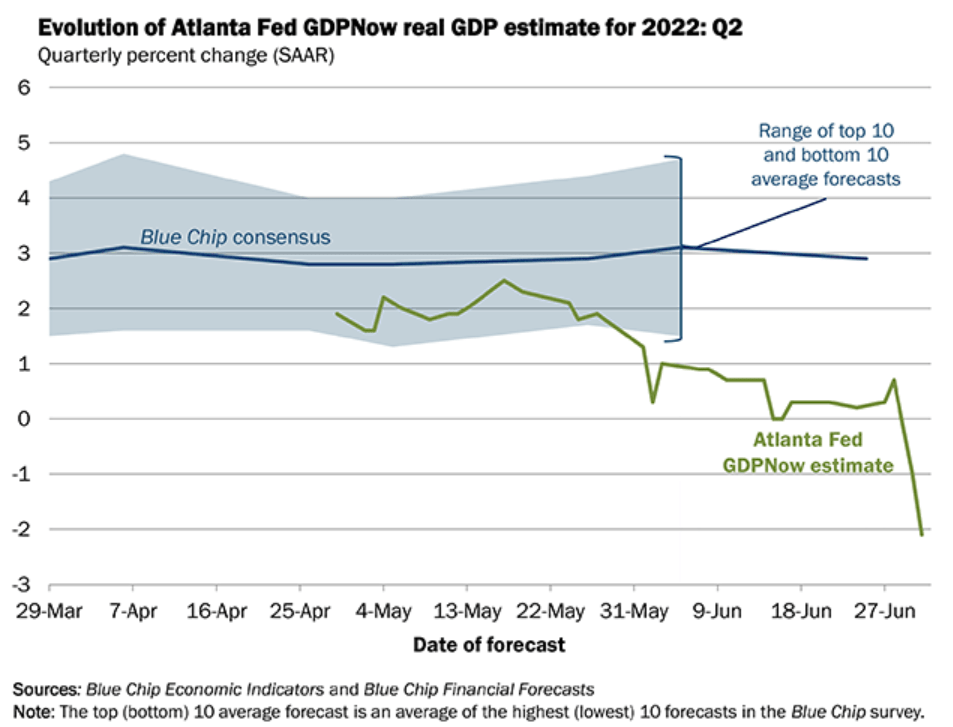 Barrick Gold Stock Fell 4.9% in October: Is it Time to Buy?