The whole crypto industry has been shaking as a result of macroeconomic pressure and the Terra ecosystem meltdown, but interest in blockchain games has steadily increased. DappRadar, the world’s dapp store that offers high-quality, accurate insights on decentralized applications. This is despite the fact that cryptocurrency values fell precipitously during the second quarter.

According to the survey, the market is on target to generate more than $12 billion by the end of the year as investment in blockchain gaming presently exceeds that of the previous year by 33%. More than $2.5 billion in venture capital was committed during the second quarter, equal to the first three months and surpassing the $4 billion in capital raised throughout the entirety of 2021 in just six months and this is yet another inflow of funds into the industry.

Blockchain-based games have become one of the most promising sectors of Web3. We are gradually seeing how Immutable-X, Gala Games, and other networks are positioning themselves to lead the rising category in years to come with impressive partnerships already in place.

Blockchain games have benefited from the troubled state of the rest of the cryptocurrency market by collecting the majority of unique active wallets (UAW). By the end of the quarter, gaming Dapps accounted for 52% of all blockchain activity. 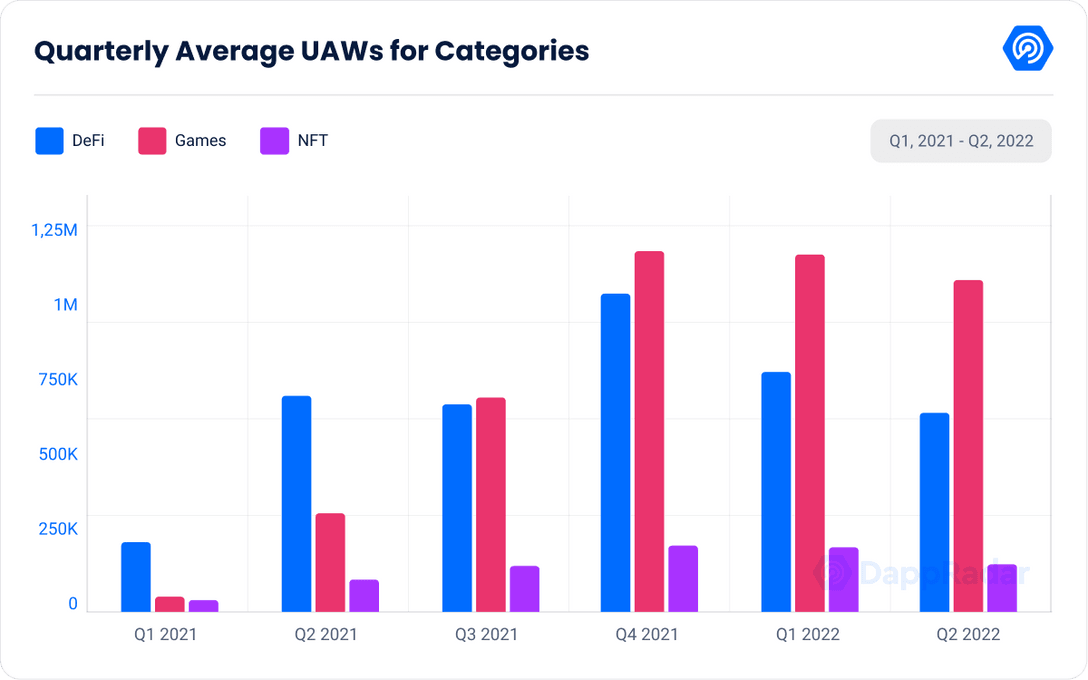 The most popular blockchain game overall is still Splinterlands, which had 283,729 UAW at the end of the third quarter. Due to a significant redesign that removed the daily login bonuses, The Hive’s trading card game lost 61% of its user base in June but still maintained the top spot in Q2.

The second-ranked game Alien Worlds, whose player base stayed largely consistent with UAW declining just 4% in Q2 compared to the prior three months, was another shining example. Overall, Alien World’s UAW increased by 4% over the same time last year.

Farmers World, which had a 33% increase in users during the quarter, is currently in the third position. Meanwhile, Axie Infinity has not performed well during the current crypto winter. Axie Infinity, once among the most well-known blockchain games overall, has suffered an 83% decline in users since the end of the first quarter as a result of a recent attack that resulted in the loss of over $600 million worth of its native tokens.

New blockchain game on Polygon Sunflower Lands UAW increased by 10,000% to over 11,000 users during the quarter. Gameta on Solana, which completed the quarter with more than 30,000 UAW, also experienced encouraging growth.

77.1% of Salvadorans surveyed think the gov’t should ‘stop spending public money’ on Bitcoin