Disclaimer: The following analysis is solely the writer’s opinion and should not necessarily be considered as investment advice.

Uniswap’s price movement in August and November was markedly bearish. Some evidence suggested that buyers were accumulating the coin since August’s fall. UNI saw no strong rally. Bulls were stopped at the $7.5 mark.

If Bitcoin gained bullish momentum, Uniswap might be a coin that rallies quickly. UNI could see new lows until market sentiment changes. Technically, the $5.8 level may offer a shorting opportunity.

A bearish market structure and an ordered block to beat at $5.83 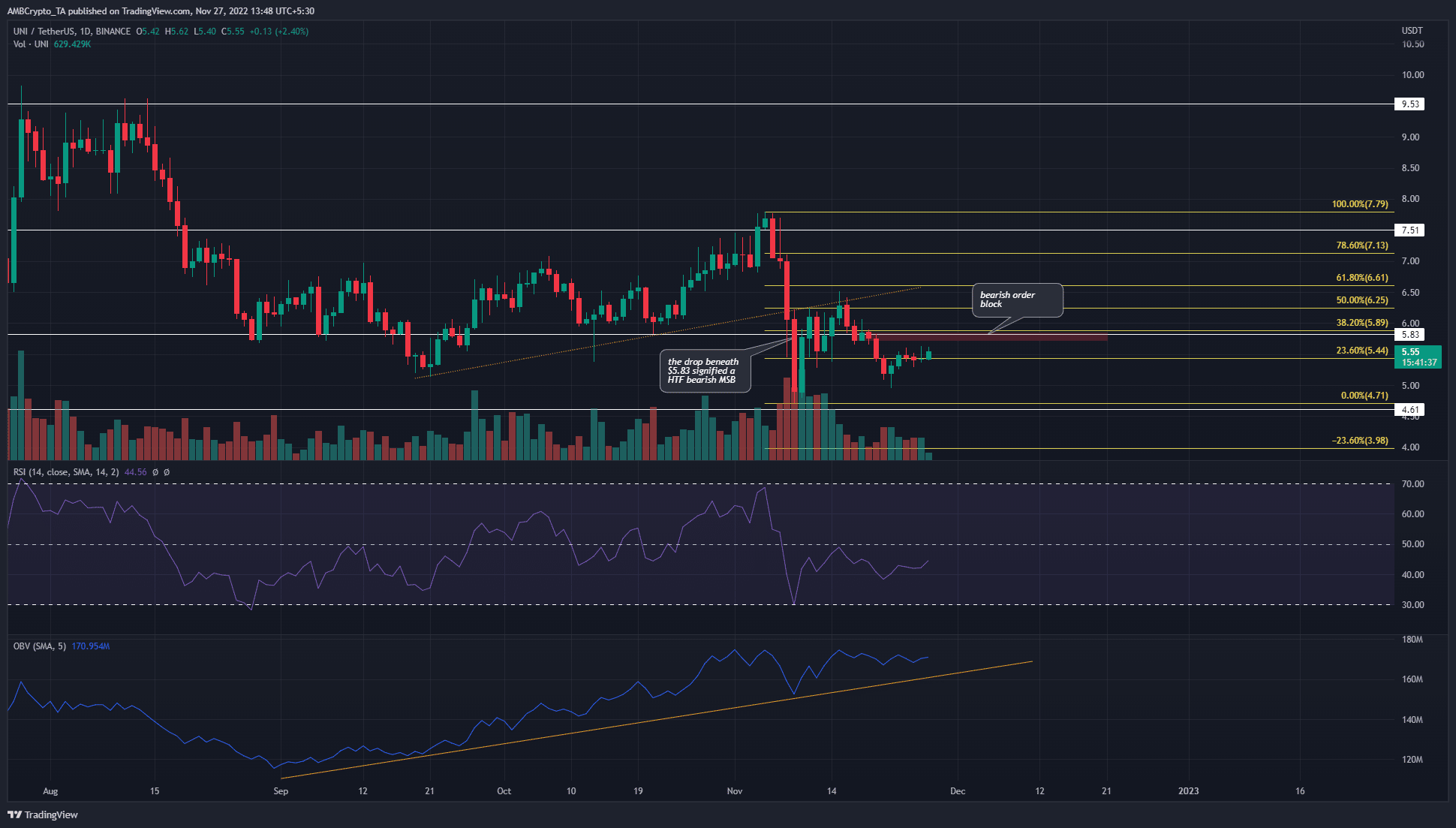 On the 8th and 9th November, Uniswap started to fall below $7.51 that bulls had so worked hard for since September. As selling pressure intensified, the pullback quickly turned to a bearish structure.

This UNI drop was used to draw a set (yellow) of Fibonacci retracement points. It revealed the 38.2% level at $5.89. This was very close to the horizontal level at $5.83. For the majority of November, bulls tried to push above $5.8 & $6.2. They did succeed briefly, but selling pressure increased once more to force a fall below $6.25.

A bearish order block was formed at $5.89 over the last week. The red box highlighted the confluence of horizontal levels and market structure favoring short positions. To show bearish dominance, the RSI was also lower than the neutral 50 mark.

The OBV has seen a series higher lows than September. Despite the dramatic drop in November, OBV didn’t register a large selling volume. Despite the price trend’s steep drop, buyers have remained steady, which suggests that Uniswap could be one the fastest coins to rally once the market sentiment shifts to a bullish favor.

The mean coin age is rising again, and development activity has also increased.

Investors who are looking for long-term returns can take comfort in the fact that recent months have seen significant development activity. Since June, it has been steadily increasing. It also showed a rise in network growth metrics two weeks ago. This indicated that more users were on the market. This could lead to an increase in the demand. UNI tokens. However, this metric is now less popular.

The average coin age metric (180-day), also experienced a sharp decline earlier in the month, but was now rising again. This suggests that the coinage was on the rise following the recent sell-off and could be a sign of accumulation.

Is Uniswap [UNI]’s new NFT component enough to drive it out of bear claws?